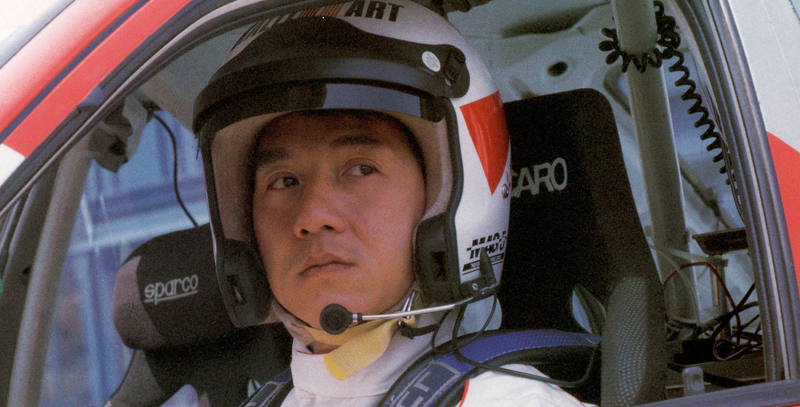 Jackie Chan began his career as a stuntman in classic Eastern flicks, that for the most part take place in the Chinese Qing dynasty (1616-1911). A paradigm shift took place in Hong Kong cinema in the early 1980s – kung fu films became contemporary.

Thanks to his success in Japan, Jackie Chan met the CEO of Mitsubishi. For the film “Wheels on Meals” (1984), the business partnership between Jackie Chan and Mitsubishi was finally officially concluded and was to last for decades.

Mitsubishi not only provided the fourth leading role for the film “Wheels on Meals”, namely the bright yellow food truck by Thomas (Jackie Chan) and David (Yuen Biao), but also promoted the so-called Jackie Chan Cup for the first time ever at Jackie Chan’s request. Since then, Jackie Chan has invited greats from the film industry to this charity event every year to choose the winner in a friendly car race.

One might pick out a slight, but non-existent, chauvinistic undertone, but the surprise remains that the drivers were and still are female. At the time when the male-dominated Hong Kong cinema was not a matter of course, this action shows Jackie Chan’s modern foresight.

The Jackie Chan Cup was held almost invariably in Macau from 1984 to 2003, ahead of the official Macau Grand Prix, and quickly became a must-attend annual event for fans and media representatives from Asia. As a co-pilot, however, professional racing drivers were and still are present in the passenger seat – if only for safety reasons.

In the third year of the annual event, the car race was called the “Jackie Chan Colt Race” because every racing car was a Mitsubishi Colt, which was then in its second generation and received a small facelift and was highly regarded worldwide as a sporty but spacious small car.

The video below shows the highlights of the race ahead of the 33rd Macau Grand Prix, as well as an energetic Jackie Chan and a young Maggie Cheung on the podium. The year before, Jackie Chan shot his film “Armour of God” (1986) in Yugoslavia and nearly died in a stunt.

The photos of the race show Jackie Chan with long hair after the accident and his severe head surgery. Incidentally, Mitsubishi also provided the second leading role for “Armor of God”, the souped-up wonder car Mitsubishi Colt C10 Spider.

Another video highlight from 1989 was rediscovered. That year, the charitable showdown of the Mitsubishi cars was called the “Mitsubishi Jackie Chan Trophy Race”. With continuity, the East Asian filmmakers and businessmen had never done the same as the strict West. But already now, at the fifth annual race, Jackie Chan was an Asian megastar, and the youngsters dreamed of being chosen by him as one of the drivers and being able to do something more for their own publicity.

By the way, it wasn’t until 1988 that the charity “The Jackie Chan Charitable Foundation” was founded four years after the first fundraising race! (click here to read more)

1998: Relocation of the Jackie Chan Cup to Guangdong, China

One year after Hong Kong was reintegrated into mainland China and the same year that Jackie Chan would become a superstar worldwide thanks to “Rush Hour”, the popular celebrity race was held at the Zuhai International Circuit in Guangdong, which opened in 1996.

The title at the time: “Ericsson Mistubishi Jackie Chan Foundation Charity Race”. What a name! Here too, Mitsubishi provided the racing vehicles, at that time Mitsubishi Lancers, and also here only female drivers from China, Hong Kong, Singapore and Taiwan were represented.

Someone should say that Jackie Chan is not campaigning for women’s rights.

2000: End of the collaboration with Golden Harvest

At the beginning of the new millennium, another title adjustment. The charitable “Golden Harvest Mitsubishi Jackie Chan Race” also took place during the 47th Macau Grand Prix from November 17th to 19th. At the time, the film “The Accidental Spy” was in post-production and should be released worldwide in January, 2001, beginning in Hong Kong, as Jackie Chan’s last film under Golden Harvest.

Here, too, actresses from Far Eastern countries such as Singapore, Malaysia, Thailand, China, Taiwan, Hong Kong and Korea were put behind the wheel. With the help of professional racing drivers at their side, they delivered a terrific race as always. Jackie Chan put two laps of honor in a Mitsubishi Pajero 1800 cc before the race’s official start.

Then there was an accident. Annie Wu wrecked her racing car but was unscathed. She was later jokingly awarded the prize as “the most typical female driver”. The Korean Shanna Han was named the most stylish rider and the best rider was Golden Harvest’s then new discovery Audrey Fang.

With increasing success in Hollywood thanks to films such as “Shanghai Noon” (2000) and “Rush Hour 2” (2001), the general media interest in Jackie Chan’s person also increased. He took part in the 23rd edition of the Dakar Rally, which started on January 1, 2001; not as a driver but as a guest of the team. As early as 2000, he was a guest of Mitsubishi in the Cairo section of the rally.

In November, 2003, Mitsubishi Motors Corporation and Ralliart Inc. merged and formed the Chinese team for the 2004 Dakar Rally. This represents a further transition in Jackie Chan’s racing career, as he became Honorary Team Director of his Mitsubishi Ralliart team China elected.

After a detour to Guangdong and the return to Macau, the annual Jackie Chan Cup took place on June 27, 2004, this time at the Shanghai Circuit, where it was to remain from now on. Jackie Chan drove a specially designed Mitsubishi Eclips and led the field. The 15 following Lancers finished the race on a sunny day. The Korean actress Christy Chung emerged as the winner.

In March, 2015, Jackie Chan met the Chinese racing driver David Cheng, who was just celebrating great success in racing. Both compatriots quickly got into conversation about a possible collaboration. Then Baxi DC Racing Alpine was formed, which is considered the first Chinese organization of the WEC (World Endurance Championship).

In October, during the Asian Le Mans season, the team was renamed Jackie Chan DC Racing for marketing reasons. The racing cars of the time featured advertisements for the new Jackie Chan film “Kung Fu Yoga”, which was soon to be launched.

At the original Le Mans 24-hour race, the Jackie Chan DC Racing team actually won second and third place in the LMP2 class in an Oreca 07 Gibson – after Timo Bernhard’s German Porsche team – and entered the History as the first Chinese winning team.

“I met Jackie Chan, co-founder of my team, last March. […] Jackie was a racing driver himself, not at this high level, but he is a big racing fan; many people do not know that.”

So, we can be curious what fans of Jackie Chan will expect in terms of racing in the future. Maybe a second part of “Thunderbolt”? Or a similar film about racing? Anything is possible with Jackie Chan.