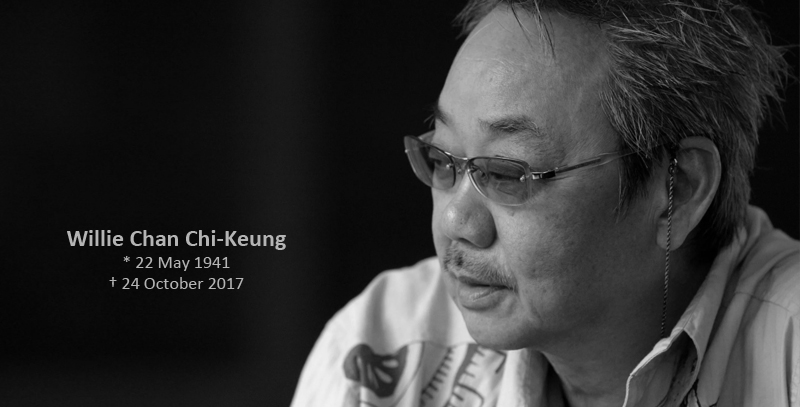 Willie Chan was born Chan Chi-Keung in Malaysia on May 22, 1941. He attended the East-West Center in Hawaii. He obtained his university degree in marketing in 1966, probably just like his fondness for brightly colored Hawaiian shirts, his trademark in addition to his tinted glasses and “fancy” hairstyles. To gain a foothold in the film industry, he moved to Hong Kong in 1970, where he worked as a talent manager and film producer for the newly founded film company Golden Harvest.

Golden Harvest’s directors were Raymond Chow and Leonard Ho, both well-respected former filmmakers among the Shaw Brothers and who made Bruce Lee a hero. After Bruce Lee’s tragic death in 1973, every studio sought a replacement to boost sales, including Golden Harvest. Meanwhile, a rather unknown Jackie Chan was still on the road as a stuntman and stuntcoordinator with a few supporting roles in the turmoil of Hong Kong cinema.

It was Charlie Chin Chiang-Lin, a Taiwanese superstar, who invited Jackie Chan as one of his bodyguards to his wedding to Josephine Siao Fong-Fong in 1975 because he had impressed him in the joint film “Police Woman” (1973). The VIPs of the Hong Kong film industry were guests – including Willie Chan. The two Chans, not related, met there for the first time, and the top manager quickly realized that this boy had potential.

“He’s not particularly pretty and has a big nose, but he also has that certain something,” Willie Chan said often in interviews about his offspring, Jackie Chan.

Willie Chan proposed the youngster to his boss at the time, Lo Wei, who, as he himself claimed, was responsible for the discovery of Bruce Lee. Jackie Chan was signed for the first time and the film “New Fist of Fury” (1976) was made as one of the famous Lee legacy films. Many other films followed under Lo Wei, none of which were very successful and above all could not show Jackie Chan’s genius. Charlie Chin and Jackie Chan later worked together in the hit film “Winners and Sinners” (1983) and other successful action comedies.

The Chans make it on their own

It was Willie Chan who initiated Jackie’s groundbreaking two-film distribution to Seasonal Films in 1978 (“Snake in the Eagle’s Shadow” and “Drunken Master”) and pulled the strings a year later to get Jackie out of the career-devastating contract Lo Wei – a book-filling story in itself. Since then, Willie and Jackie Chan have followed professional paths together, sealed their business relationships in 1979 with a handshake (never in writing!), learned English together at the Berlitz school on their trip to the USA in 1980, founded Jackie’s film company Golden Way Films in 1985 and many more descendants.

But Willie Chan not only represented his friend and client Jackie Chan. He is also considered to be the discoverer of Michelle Yeoh, whom he met in 1983 in their hometown of Ipoh. Michelle Yeoh, who was surprisingly elected Miss Malaysia at the time, met the top manager at a party.

“She was very attractive, but I didn’t approach her, assuming she was there with her boyfriend. And if I had asked if she wanted to become a star, that would have been wrong.”

Nevertheless, it made an impression and so he recommended her to Dickson Poon Dik-Sang for two commercials, one with Jackie Chan from 1984 for the luxury watch brand Guy Laroche.

Michelle Yeoh quickly enjoyed working on camera and asked Willie Chan to manage it. She either wanted to join Jackie’s company, Golden Harvest or Dickson Poons D&B Films. Willie Chan recommended Michelle Yeoh to D&B Films because he didn’t believe in her fighting skills. He thought wrong, because Michelle Yeoh earned the reputation of a female Jackie Chan worldwide with the film “Police Story III: Supercop” (1992), which was also co-produced by Willie Chan.

The top manager also invested in drama. For example in Stanley Kwan’s “Center Stage” (1992), produced by Jackie’s film company, and also the 2009 hit “Shinjuku Incident”, for which he was nominated for best producer at the Hong Kong Film Awards.

Together with the Golden Way film company, the JC Group was founded in 1985, which acted as a talent factory for Jackie’s films. Over 50 actors and screenwriters were discovered, expanded and made fit for Jackie’s films here.

It wasn’t until 2009 that the film sponsor withdrew: “Ultimately, he [Jackie Chan] became so famous that success went a little to his head. He no longer needed my help and I could hardly support him anymore,” Willie Chan said in a 2014 Hong Kong radio interview. “There were many high-ranking officials at the same table, wealthy influential people. My words fell on deaf ears.”

Variety quickly reported that Willie Chan died peacefully in his sleep on the night of October 24-25. He was 76 years old. Even if he withdrew more and more from the consulting activities of Jackie Chan, both remained in friendly contact until the end. Jackie Chan wrote on Facebook about the death of his mentor:

“Another important person in my life has passed away … Willie Chan. A lot of people know that without you back then, I would not be where I am today. But what people don’t know were the things that we went through together. Only you and I know, and understand each other. You’re my teacher, my brother, my “Dai Lo” … I’ll miss you always. Rest In Peace.“

“Thank you all for your reaching out and heartfelt messages. Unfortunately, I’m still in shock. We are still waiting for all medical reports to come out. Apologize that I won’t be able to pick up any calls or messages until I have that peace of mind. We will definitely share more into to everyone when we find out from doctor. To all of my dad’s Willie Chan friends, family, and fans, he’s at peace.”

Even if the general public may not know Willie Chan, he has been instrumental in the success of many films and actors. He himself mostly acted behind the camera. But if you want to see him in front of the camera, you have to dig deep into the Hong Kong film archive. He had smaller roles in “If Tomorrow Comes” (1973), “Lucky, Lucky” (1974), “The Country Bumpkin” (1974) and “Money Is Everything” (1975).

Rest in peace, Willie Chan, thank you for everything you’ve done for us!