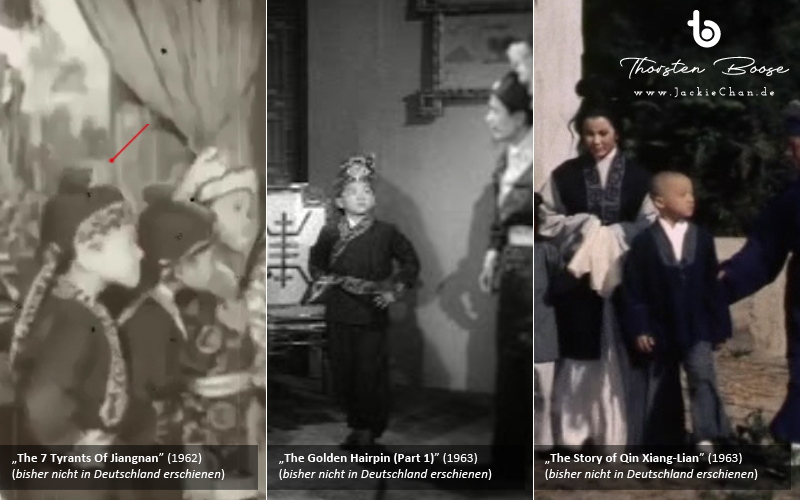 While researching my new book “The new German Jackie Chan film guide” I came across a film some time ago in which a young Jackie Chan may be seen. In the little-known and even less advertised four-part movie “The Golden Hairpin” from 1963/1964, several child actors were recruited – and one of them resembles the now world-famous star from Hong Kong.

From 1961, Jackie Chan attended the China Drama Academy, a strict school under the direction of master Yu Jim-Yuen, who taught his students the traditional art of Peking Opera including acrobatics, singing, dance and martial arts. Jackie’s schoolmates at the time were Sammo Hung, Yuen Biao, Yuen Wah, Cory Yuen Kwai and others who had steep film careers afterwards.

The art of Peking Opera has traditionally been performed on stage in front of hundreds of people for generations. But already at the beginning of the 1960s there was a decline in social interest in it. This was due to the more and more elaborately produced movies for the big screen as well as the distribution of television.

The founding of the Seven Little Fortunes

In these fast-paced times, Master Yu Jim-Yuen was forced to act. It was not until 1959 that he founded the Seven Little Fortunes, a troupe made up of his seven best students. These “seven little lucky charms” have long been the highlight at festivities, streets and stage appearances in Hong Kong (see also “Sensation: Jackie Chan discovered in old Bill Cosby TV series from the 60s!“). In the early 1960s, he also lent his best talents to film studios that were looking for cheap extras and talented child actors. 100 % of the proceeds went into Master Yu Jim-Yuen’s pockets.

This is what Jackie Chan’s first autobiography said, “My Life in Action”. But in 2015, he went into more detail: “We were allowed to keep 5 of the 65 dollars. After Sammo Hung left school saying, ‘The Peking Opera is dead, the future is the film and you will be exploited’ and Yuen Tai succeeded him, a revolution broke out. We fought for more of our own wages and, thanks to the courageous efforts of big brother Yuen Tai, we were ultimately involved with 35 dollars.”

For Jackie Chan, Sammo Hung, Yuen Biao and the others, working on the film set was a welcome change from the abusive measures at the China Drama Academy. They felt free, strong, and were often mothered by the female movie stars. Jackie Chan got his first film role in “The 7 Tyrants Of Jiangnan” (1962) (also known as “Big And Little Wong Tin Bar”).

This was followed by other films as child actors, which are known today and some of them are even available on DVD. But some time ago, I made a discovery when I was looking at old recordings for my new book “The new German Jackie Chan film guide”. I noticed a little boy in the movie “The Golden Hairpin (Part 1)” (1963). In the first few minutes of the film you can see a scene in which a conspicuous boy in costume is standing in the middle of the picture. I have made an excerpt from it available online.

Can this really be Jackie Chan? I asked myself this question at that moment and wrote down the timecode of the scene. While watching the second part, entitled “The Golden Hairpin (Part 2)” (1963), I noticed a young actor who looked similar to Jackie Chan. However, one by one. First we compare a few shots; the red arrow points in the direction of the child to be compared.

Note: Jackie Chan’s involvement is officially confirmed in the films “The 7 Tyrants Of Jiangnan” (1962) and “The Story Of Qin Xiang-Lian” (1963).

In addition to the comparison photos, the production data is also very interesting. “The 7 Tyrants Of Jiangnan” is a so-called seven-day film that was shot in a very short time. It celebrated its screen debut on December 5, 1962. Only eight months later, precisely on August 28, 1963, “The Golden Hairpin (Part 1)” was released, part two on September 4 in the same year. The first part was filmed back to back with part two, part three together with part four, and was in production much longer than “The 7 Tyrants Of Jiangnan”, also because of various larger scenes. Another four months later, from December 21, 1963, “The Story of Qin Xiang-Lian” was shown in the cinema.

It should be mentioned that the time span between the productions of “The 7 Tyrants Of Jiangnan” and “The Golden Hairpin (Part 1 & 2)” was only a few months – between December 1963 and April 1964 – whereas “The Story Of Qin Xiang-Lian” was produced in the summer of 1963 at the earliest. This time factor and the sure effects of hard training combined with slightly unusual meals in the China Drama Academy on Jackie Chan (he reports this in detail in his first autobiography) suggest that he lost his visible baby fat in this way. The differences between December 1962 and December 1963 are clearly visible.

But there is still part two of the golden hairpin saga. Here, too, I discovered a scene relatively early on in which a few child actors appear. Here are two comparison photos, on which the red arrow again points to (the presumed) Jackie Chan.

At this point, there is no clear evidence for or against Jackie Chan’s collaboration in “The Golden Hairpin (Part 1 & 2)”. The photos and videos speak for themselves, some find the similarity astonishing, others just don’t. Jackie Chan is not officially listed.

Jackie Chan’s office and the Hong Kong Film Archive (HKFA) have already been informed and will hopefully investigate the evidence further. I will of course report any news. Until there is official feedback from Jackie Chan or anyone else involved on the case, this discovery remains questionable.

You can find out more about this and other films by and with Jackie Chan in my new book “Der neue deutsche Jackie Chan Filmführer” (translated title “The new German Jackie Chan film guide”) (click here).